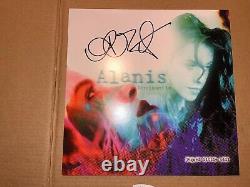 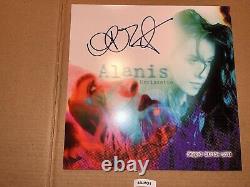 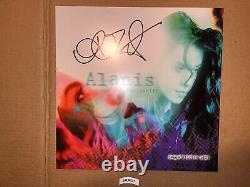 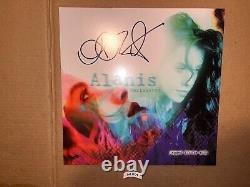 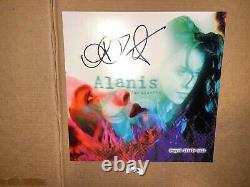 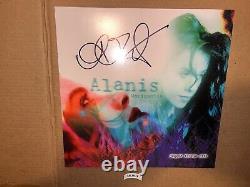 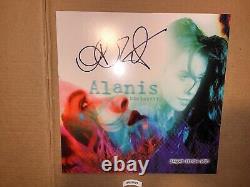 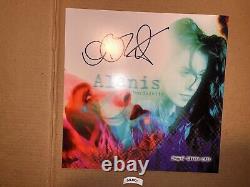 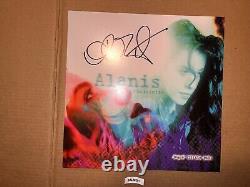 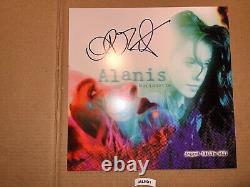 Includes vinyl record jacket sleeve hand signed by Alanis Morissette. Includes vinyl record LP copy of Jagged Little Pill by Alanis Morissette. Jagged Little Pill is the third studio album by Canadian singer Alanis Morissette, released on June 13, 1995, through Maverick. It was her first album to be released worldwide. It marked a stylistic departure from the dance-pop sound of her first two albums, Alanis (1991) and Now Is the Time (1992). Morissette began work on the album after moving from her hometown Ottawa to Toronto; she made little progress until she traveled to Los Angeles, where she met producer Glen Ballard. Morissette and Ballard had an instant connection and began co-writing and experimenting with sounds. The experimentation resulted in an alternative rock album that takes influence from post-grunge and pop rock, and features guitars, keyboards, drum machines, and harmonica. The lyrics touch upon themes of aggression and unsuccessful relationships, while Ballard introduced a pop sensibility to Morissette's angst. The title of the album is taken from the first verses of the song "You Learn". Jagged Little Pill was a commercial success, topping the charts in thirteen countries. Jagged Little Pill was nominated for nine Grammy Awards, winning five, including Album of the Year, making the 21-year-old Morissette, at the time, the youngest artist to win the top honor. Rolling Stone ranked Jagged Little Pill at No. 69 on its 2020 list of "The 500 Greatest Albums of All Time".

The album has been re-released twice: on October 30, 2015, in a 2-disc deluxe edition and a 4-disc collector's edition commemorating its 20th anniversary; and on June 26, 2020, in a 25th anniversary deluxe edition. An acoustic re-recording of the album was released on June 13, 2005, to mark its 10th anniversary. A musical stage production based on the album premiered at the American Repertory Theater in Cambridge on May 5, 2018; it transferred to Broadway the following year, and was nominated for 15 Tony Awards including Best Musical. This was acquired directly from Alanis Morissette and is unconditionally guaranteed to be authentic.

You will receive this exact item pictured in this listing. This item is hand signed by Alanis Morissette. This item is not auto-penned, stamped, or a reproduction.

Guaranteed to pass any third party authentication. This comes from a professional collector with a background in the music industry with over 20 years collecting authentic memorabilia. You must provide all documentation and correspondence between yourself and the authentication companies listed above. This item is the real deal.