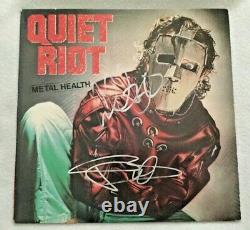 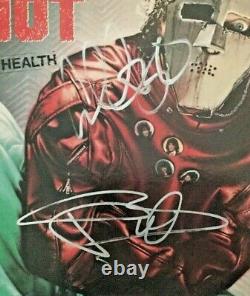 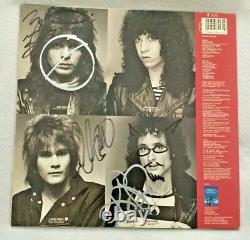 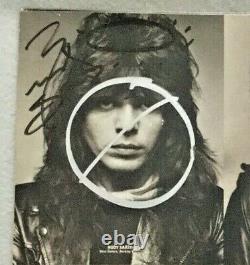 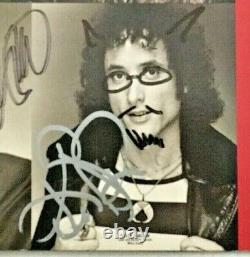 This album was signed by the entire band: Kevin DuBrow R. , Carlos Cavazo, Rudy Sarzo, and Frankie Banali R. Kevin signed at The Other Place in Ormond Beach, Florida, on July 8, 1990 (he was seeing the band Julliet whose album he had produced); Carlos signed the front and back (he signed the front at the Tsunami Beach Club in Sanford, Florida, when Quiet Riot played on July 12, 1997, the back was signed at The Station in Fern Park, Florida, on June 19, 1991, with the band Heat); Rudy signed at a bass clinic in Orlando, Florida, in the late 1980s; and Frankie signed when Quiet Riot played at the Embassy in Winter Park, Florida, May 1996. As you have probably noticed, there are some drawings on the back cover, so let me explain.

After the bass clinic, I had Rudy sign my album. Being a jokester, Rudy drew a halo over his head and devil horns, glasses, and a beard on Kevin's picture.

When I met Kevin I was initially afraid to show him my album as I'd heard about his reputation of being a hothead. Eventually, though, I worked up the courage to have him sign it. Kevin could see I was hesitant, but I handed it to him anyway and said, I did not do this to your picture. Curious, he looked at his picture and chuckled. I told him that fair is fair and he could do whatever he liked to the album. Kevin signed my album and then over Rudy's picture he drew a big circle and crossed out his face. This is a truly unique item. I seriously doubt you'll ever see another quite like this again. Also, as an added protection, this item will be sent with Signature Confirmation. This item is in the category "Entertainment Memorabilia\Autographs-Original\Music\Rock & Pop\Records". The seller is "ktmusicemporium" and is located in this country: US.